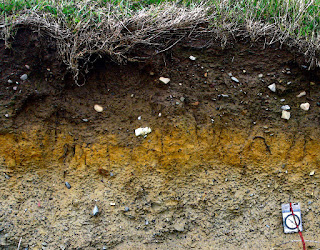 The spiritual life is a bit like dirt. Counterintuitively, the dirtier we get, the healthier we may actually be.

The Parable of the Sower compares the heart to different kinds of soil, and the in this parable, the dirtier the dirt, the better the receptiveness the heart has to the Word of God. The soils are described as "by the wayside" (the hard-packed section along the road), "stony", "thorny", and "good soil". Good soil is well tilled, soft, and rich. After a day in the garden one comes back with deep rich soil under the fingernails and all over the clothing. The other soil types typically represent elements that separate the seed from the actual dirt.

This represents how we try to protect ourselves from a variety of elements related to the Word of God itself. The Way-side heart is unconcerned and ambivalent to either the voice of God or the concerns of humanity. Stony, hard hearts have become reactionary and hardened to the struggles and hard truths of life. The Thorny hearts are those whose greeds and personal desires have inoculated them against caring for the deeper values of life. In some bizarre inversion, we who are made from the dirt of the ground, or as others have recently described it, "star stuff", try to avoid contact with soil. We similarly attempt to protect ourselves from other people, hard truths, or the suffering in our world. In doing so, we separate ourselves from a healthy spiritual life. Just like an overly clean child may be a setup for a weak immune system, an overly defensive heart may be a set up for spiritual sickness.

Have a soft heart, be willing to get dirty in this life, and allow for the fact that you just may be wrong about life and are in need of correction from God's Word. These simple principles are evidences of a person ready to receive the Word, and grow in fruitfulness.

The Gathering at Salem

Podcasts from God: For People Who Hate Church